← more from
S P I N S T E R
Get fresh music recommendations delivered to your inbox every Friday.
We've updated our Terms of Use. You can review the changes here. 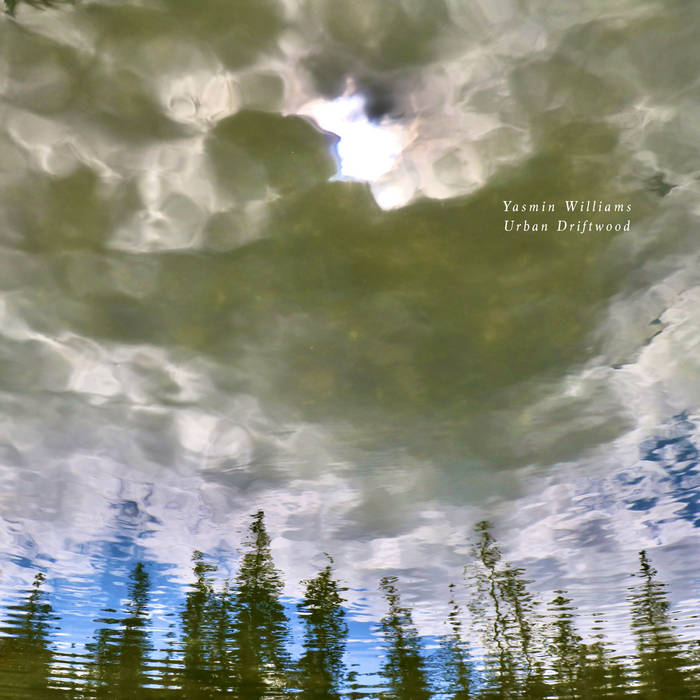 koshpeli It's the perfect album. Songs that fill you with joy, songs that make you feel melancholic, slow haunting tunes, and songs that have you tapping your feet. Play it in the background as you work, put it on for a long drive, or sit and listen and enjoy the incredible and innovative techniques and try to guess how she even did it! Favorite track: Sunshowers.

mod451 Everything about this album is ethereal. Light and love flow through all of the tracks, but especially After the Storm, which lingers in my brain for days after I listen to it.... Favorite track: After the Storm.

Dan F Mellow instrumentals that make you look beyond and enjoy what God has created. Use as background to some youtube camping and kayaking videos.
more...

Yasmin Williams sits on her leather couch, her guitar stretched across her lap horizontally with its strings turned to the sky. She taps on the fretboard with her left hand as her right hand plucks a kalimba placed on the guitar’s body. Her feet, clad in tap shoes, keep rhythm on a mic’d wooden board placed under her. Even with all limbs in play, it’s mind boggling that the melodic and percussive sounds that emerge are made by just one musician, playing in real time. With her ambidextrous and pedidextrous, multi-instrumental techniques of her own making and influences ranging from video games to West African griots subverting the predominantly white male canon of fingerstyle guitar, Yasmin Williams is truly a guitarist for the new century. So too is her stunning sophomore release, Urban Driftwood, an album for and of these times. Though the record is instrumental, its songs follow a narrative arc of 2020, illustrating both a personal journey and a national reckoning, through Williams’ evocative, lyrical compositions.

A native of northern Virginia, Williams, now 24, began playing electric guitar in 8th grade, after she beat the video game Guitar Hero 2 on expert level. Initially inspired by Jimi Hendrix and other shredders she was familiar with through the game, she quickly moved on to acoustic guitar, finding that it allowed her to combine fingerstyle techniques with the lap-tapping she had developed through Guitar Hero, as well as perform as a solo artist. By 10th grade, she had released an EP of songs of her own composition. Deriving no lineage from “American primitive” and rejecting the problematic connotations of the term, Williams’ influences include the smooth jazz and R&B she listened to growing up, Hendrix and Nirvana, go-go and hip-hop. Her love for the band Earth, Wind and Fire prompted her to incorporate the kalimba into her songwriting, and more recently, she’s drawn inspiration from other Black women guitarists such as Elizabeth Cotten, Sister Rosetta Tharpe, and Aligia Mae Hinton. On Urban Driftwood, Williams references the music of West African griots through the inclusion of kora (which she recently learned) and by featuring the hand drumming of 150th generation djeli of the Kouyate family, Amadou Kouyate, on the title track.

Yasmin Williams is virtuosic in her mastery of the guitar and in the techniques of her own invention, but her playing never sacrifices lyricism, melody, and rhythm for pure demonstration of skill. As she said in an interview on New Sounds’ Soundcheck podcast, “The songwriting process drives the techniques. I don’t use techniques that aren’t needed.” Storytelling through sound is important to her too. As detailed in the liner notes, the songs on Urban Driftwood were completed during the COVID-19 pandemic and subsequent lockdown, in the midst of a national uprising of Black Lives Matter protests in response to the killing of George Floyd and Breonna Taylor. The sequencing on the record intends to illustrate the unfolding of these events, beginning with album opener “Sunshowers,” with its rich texture of hammer-ons on pull-offs expressing innocence and collective excitement for a new year and decade, swiftly moving to the more contemplative speculation of “I Wonder” and the self-reflective “Juvenescence,” with its Bridget St. John-reminiscent opening and descending and ascending arpeggios throughout. On “Adrift,” the first track on Side B, Yasmin’s guitar engages in a call-and-response fugue with cello, played by Taryn Wood, emulating the political unrest, chaos, and floundering of the country as it reckoned with the persistence of white supremacy and vast inequality.

The narrative plot of Urban Driftwood culminates in the repetitive, meditative sounds of guitar, kora, kalimba, and hand drums on the penultimate title track, creating a sonic landscape that communicates the feeling of movement and evokes images of the natural beauty that persists within urban spaces. As she wrote the song, Williams was reflecting on her personal role in the context of the current societal moment, considering her position as Black female guitarist within a white male dominated field. Yasmin says, “There are not many Black guitarists within this genre and particularly with all of the political and social discord that was/is happening in the United States in 2020, I felt it was extremely important to include a song on the album that was inspired by my heritage and paid homage to who I am, the household I grew up in, the music I listened to as a child. ‘Urban Driftwood’ is more like the music I grew up listening to than any other song I’ve released so far.” The record concludes with the emotional, “After the Storm,” questioning the path ahead while embracing a sense of peace through its interwoven guitar parts. The track is a fitting denouement for this album, that while it illustrates current struggle, can’t help but open-heartedly offer a timeless solace.

---
"The impetus of taking a photo is the rejection of trying to describe something that you hold dear. You just want to show it. And that's what Yasmin's record feels like." -Cameron Knowler

“Yasmin Williams truly is a guitarist for a new century. Unburdened by canonic lineage or stylistic convention, Williams has discovered a way of playing that is wholly her own. The ten tracks on Urban Driftwood lay down a dense blanket of polyrhythm and deft technical ability, a woven patchwork of microtonal ruminations that express the emotions of an artist's soul through her instrument. Williams' harp guitar, acoustic guitar, kalimba, and kora blend seamlessly together, bringing subtle variation from track to track, highlighted at times by cello, Djembe and cajon. Lush and emotive, Urban Driftwood brings fresh invention and creativity to the fingerstyle guitar genre, showcasing a truly modern spirit that is sure to inspire.” -Daniel Bachman


“Yasmin's music is perfect for a gentle afternoon dance or to create a few moments of peacefulness in your day. As a multi-instrumentalist, her music fearlessly leads listeners through soundscapes and dimensions that reharmonize, recenter, and ground us during these challenging times. Like the album's ending track, "After the Storm," even the song titles remind us of the power of nature and give us the courage to hope for calmness throughout the upcoming seasons.” -Valerie June


“Yasmin Williams' second album, Urban Driftwood, is the first work of art of 2020 that has been able to push through the violent noise of this moment and leave me in a state of complete ease. ‘I Wonder’ and ‘Juvenescence’ are classic fingerstyle compositions that evoke instant familiarity but are anything but derivative. ‘Dragonfly,’ ‘Sunshowers,’ and ‘After the Storm’ are so exquisitely crafted that they almost—but not quite—manage to conceal the depth of thought, talent, and process that went into their creation. The entire album is like a perfectly designed object, each surface so smooth and each corner so elegant that the entire thing belies its own brilliant origins. Fans of fingerstyle guitar, beautiful and deep composition, beauty, lofty aspirations, human decency, and everything that is still wonderful about creating anything today will love these recordings.

Willams' playing is completely precise without any hint of pretension. The techniques she uses are innovative without a single unnecessary embellishment. From the bright but rich guitar tone, to the subtle layering of textures, to the specifics of each composition—everything is perfectly balanced. But it's impossible for these songs to become just the soundtrack to one's daily routine. This music seems to bring up memories I didn't know I had, it sharpens my mind and allows room for only the most essential thoughts to push to the surface. It makes me want to do better, and for my words and actions to be as clear as my thoughts. Like a cold drink of water on a perfectly sunny day, it focuses and calms.” -Kaki King


“I first came across Yasmin Williams in spring 2019, when I noticed that she gave a concert with our friend Daniel Bachman. Here was someone—roughly my age, no less!—making inquisitive, focused guitar music that pushed past my frames of reference. Naturally, we had to tour. On a short run of Virginia and Washington, DC last fall, Yasmin consistently brought the house down. Like her performances then and now, Urban Driftwood is full of showstoppers (‘Okay so what the fuck are you doing in ‘Swift Breeze?!’’ I asked, mid-listen, as my jaw swung open), and recalls minimalist composers, griots, and Guitar Hero. It's a clear extension of Yasmin's compositional depth and remarkable technical skill on kora, kalimba, and six-string and harp guitars, and sure to satisfy musicians and listeners alike. You simply must listen.” -Eli Winter

Urban Driftwood was engineered and mixed by Jeff Gruber at Blue House Productions in Kensington and Silver Spring, Maryland and mastered by Charlie Pilzer at Tonal Park Studios in Takoma Park, Maryland.

All songs composed and performed by Yasmin Williams, with additional performances by Taryn Wood (cello) and Amadou Kouyate (djembe and cadjembe).

Bandcamp Daily  your guide to the world of Bandcamp